SOEPBOER & STOOKER Pop-up and Shop Window Route
Pop-up shop: During the Wad & Design Festival the Soepboer & Stooker Pop-up shop will under the direction of Anne Stooker, after the successful edition of last year, again temporarily settle on the Langestreek 19 on Schiermonnikoog. Soepboer & Stooker offer young designers a platform to showcase their products to the public. Exclusive clothing from young and renowned designers, but also books, magazines and accessories can be found in the shop.

SOEPBOER & STOOKER COLLECTION
A sampler is a work of embroidery which is often produced as a test of
one's skills in needlework. The sampler consisted usually of a piece of cloth on which could be embroidered lots of things: figures, the alphabet, motives or decorations. Modern samplers the ones that the designer duo will embroider for the Wad & Design Festival, are no longer called  samplers but memory rag or embroidery rag. The reason that the samplers have been renamed is because nowadays they are usually made for the occasion of a certain event.
Soepboer & Stooker created the clothingcollection 'Latterdúeken' (in Schiermonnikoger dialect the name for a sampler) of memory rags  for the Wad & Design Festival. In this collection are the characteristics of samplers (literally) superimposed on square pieces of fabric. Visitors will be asked to embroider their names on the collection, so that eventually their names will function as a portable guestbook. Gradually, the collection will turn in a reflection of the visitors to the Wad & Design Festival.

EXTRA
islander capes - As of Tuesday, September 17th, the capes, which designer
Conny Groenewegen created on the spot with the help of experienced islander women, will be available for use by the festival audience. The capes are available at the pop-up shop. Also, the Schiermonnikoog wax fabric will be for sale.
envelope book - The pop-up shop in addition to being a store will also be a envelope collection point for the products of 'Envelope Book'. The notebooks and notepads are made in the Netherlands out of the paper of envelopes. During the festival you can hand in your own envelopes at the Pop-up for this purpose. 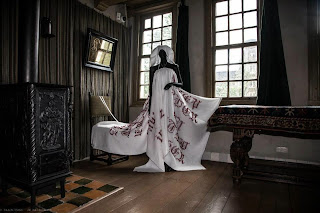 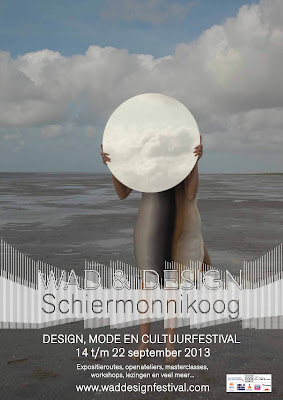